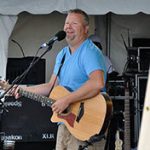 Chris Meldrum is the son of Mick and Barb Meldrum of Algonac. Chris and his wife Dena have 2 children. Chris grew up in Algonac and was influenced by music from a very young age. Chris’ dad, Mickey, has been a long-time local favorite entertainer, singing and playing music for people for over 50 years. There was always music in the Meldrum house. Whether it was mom and dad’s influence of classic country or Chris’ older siblings listening to now-classic rock, Chris was influenced by so many genres. His brother Gary has also been playing drums in bands for over 30 years and later would join Chris in the band. Another big influence on Chris was his cousin Jim Meldrum who also has been entertaining around the area since the 1980s.

Chris started his music career later in life. He coached varsity girl’s basketball for 15 years, so music took a back seat for a while. During that time in the late 90s, Chris started singing a little Karaoke around the local establishments. He won a contest that helped propel his confidence in his singing. From there it wasn’t until Chris was about 30 years old that he bought a guitar and started honing his craft. Chris started playing guitar and singing around campfires and jam sessions with cousins, which then to a few parties of friends that turned into hired gigs at local establishments.

Because of the variety of musical influences he has had over the years, Chris plays a wide range of music styles. You can hear him playing Classic Rock, Country, Folk, Rock, and Top 40 on any given night. Chris started his musical career playing solo and then had his brother Gary join him playing congas on a few gigs. Before you know it long-time friends TJ Fernandez and Dickie Poole joined, Gary moved back to drums, and they became the Meldrum Brothers Band.

Note from Chris: I’m so honored to be in a band with these guys. They are the best musicians around and more importantly, they are great friends. Singing to me is very therapeutic and a joy to do. I love seeing all of our friends and fans have a great time when they come out to hear the band, and I feel very humbled with all of the compliments that we get and I get personally. The band is a very big part of my life and one that I enjoy tremendously. 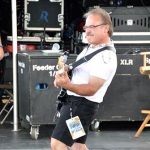 TJ was born and raised in Algonac, Michigan, a city that divides the US and Canadian borders with a population just over four thousand. His family was very musical where an 88 key baby grand piano was the center point of their living room. The piano was played by all but mastered only by sister Julie. Brother Fred (Chico) looked like Elvis and sang like him as well. Brothers Dave and Paul were also multi-talented musicians. Dave played guitar, bass, and sang lead vocals in his band. Paul plays keys, guitar, trumpet, and just about anything else he picks up. Believe it or not, TJ first started off playing the banjo!!! When he was around 7 or 8 his father Fred who always loved the banjo sent him off to banjo lessons for 3 years. After that TJ learned to play guitar from Paul and Dave. TJ’s sister Gail plays trumpet, guitar, and sings like an Angel. TJ, Gail and Dave played in the Algonac High School Jazz Band called the “TAFT ROAD JAZZ SOCIETY”. This was a band that traveled and played gigs to raise money for school band equipment and trips. Gail is the one who persuaded TJ into playing the bass guitar when he was a freshman in high school. The senior bass player had just graduated and the band needed a new bass player. There was only one problem; TJ didn’t know one thing about playing the bass guitar. Luckily big brother Dave stepped in and hooked TJ up with a new bass guitar that had stickers all over the neck showing him where all the positions were on the guitar. This was a great way for TJ to start learning how to play the bass. A few months later TJ learned how to read music. TJ loved the continued trend of excellence that came with playing in the jazz band for 4 years under the direction of the Great, George Appelman!!!

TJ has been playing all over the St. Clair County area from 1979 to present. He started playing with the Meldrum Brothers Band in 2008 sharing the stage with Chris, Gary, Erik and Richard. To date, the latest accomplishments for the band have been the bigger stages. Performances include opening up for Lee Greenwood on his “Stars and Stripes” tour, the Luxurious Ovation Yacht, and Toby Keith’s Bar. Performing on Lake St. Clair at the Aquapalooza, a Pure Michigan Campaign started and sponsored here locally by Colony Marine. Colony Marine is also one out of only 3 worldwide Sea-Ray Dealers to have achieved a 100% customer satisfaction score has also recorded in 2 world class studios; Silver Dragon Productions under Mike Oswald and the famed Studio “A” in Birmingham MI. TJ’s bass tracks can be found on 3 Christmas cd’s that raised money for Toys for Tots, as well as two other cd’s from artists making their professional debuts, Kelly Watkins and Tim Raymond.

TJ has 6 bass guitars in his collection, 2 of them being acoustics, one a fretless. TJ currently plays a Fender American Deluxe Jazz 5 string Bass and uses a Fernandes Tremor Deluxe 5 string as his back up. TJ plays out of a Trace Elliot AH 250 Bass head with a Trace Elliot 4×10 cabinet, using a Trace Elliot 2×10 cabinet for smaller gigs. When TJ hits the big stages he uses 2 Trace Elliot 1015h cabinets side by side, each loaded with two specially designed Celestion 10 inch speakers. Also included in the cabinet is a high frequency variable attenuation horn in a natural band pass sealed chamber for tight midrange. This allows the single 15 inch speaker below them more internal volume!! The two cabinets are powered with a massive Trace Elliot AH 1200 – 12 Amp. TJ also uses Bose speakers with Crown power amps to keep the band’s PA system jumping.

Note from Chris: As anyone could tell you, T.J. brings the energy to the band. He is the ultimate performer. He gets the band going every night and helps us stay at the top of our game. T.J. and I have been together the longest in the band and it is a joy to perform with him every night. 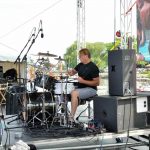 Erik has been playing the drums since his 5th grade music class. His mother was a music teacher for over 30 years and influenced him greatly to become a music teacher himself. He then studied drums privately in middle school and eventually took instruction from Norm Fickett, the Principal Percussionist from the Detroit Symphony Orchestra during his freshmen year in high school. During the same period he took drum set instruction from Detroit Studio Drummer Joe Chila, and by his senior year in high school Erik had studied with six more instructors from various genres of music. Because of the many musical influences, he decided to study music in college and major in Music Education and minor in Music Performance.

Upon graduation, he took the Band Director position at Clintondale High School and taught instrumental music for 20 years. During this time he instructed the marching, concert, and jazz bands along with teaching Music Appreciation and American Jazz Studies classes. For two years Erik also worked as the Performing Arts Director for the Clintondale District in which he created the CHS Educational Jazz Festival performing with music greats Phil Woods, Bobby Lewis, Jeff Berlin, Paul Wertico, Steve Talaga, and Bobby Shew. He also directed the pit orchestra for the community plays and other local events.

Erik originally played with TJ and Dickie in high school band class for which they soon started their own performing group. They played together for over 13 years at various establishments in the area and developed a great following. Erik then re-joined TJ and Dickie to play with the Meldrum Brothers Band featuring Chris Meldrum in November of 2011 and continues to play to this day.

Note from Chris: After my brother Gary had to leave the band, I was worried that we would not find someone who could fit our band with all the different types of music that we play. Boy was I wrong. When Erik joined the band in 2011 we didn’t skip a beat and continued to grow as a band. His drumming skills still continue to amaze me. We are so lucky to have Erik in our band. 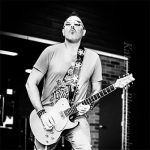 It’s all about the performance and entertainment!

Steven’s story starts in 3rd grade with Kiss; Explosions, loud guitars, lights, blood, a Starchild, a Demon, a Cat-man and a Lover. Serious shit right there for a 10 yr old and he had to be part of THAT!

Fast forward a couple years and Steven attends Algonac adult education with his fathers Fender acoustic guitar towards his March to “rock-stardom”. Along the way he takes 6 months of private instruction from Mike Lowzowski as a teenager (thanks Mike) and now it’s on!

Steven starts a few original projects and has the opportunity to share the stage with major artists in the 80’s/90’s including Vixen, Night Ranger, Mountain, Extreme, Cinderella, etc. In the 90’s he makes the decision to move south and start a family putting music on hiatus. Needless to say the bug hasn’t gone away and a couple years later he’s back at it… it’s in the blood.

After moving back to Michigan, Steven writes a records a full album of original material. Soon after he joins a local “cover band” and starts playing the east side bar circuit. After a couple years with “The Cylinders” he moves on to play with the “cover band” FunHouse. He also has the opportunity to perform with the national recording hip-hop artist “Hatch”. In the off time he records of other artists in his studio adding guitar parts to various genres such as rap, funk, rock, motown, country, ambient, christian… even opera!

Steven has also been fortunate enough to have had the opportunity to jam/record/perform with numerous professionals from major bands such as George Clinton, James Jameson Jr (Chaka-Khan, Bruce Springsteen, Heavy D, Pavarotti, Motown), Black Eyed Peas, The Temptations, Yngwie Malmsteen, Berlin, (Jefferson) Starship and Bad Company, learning something from each and every one of them.

Steven recently moved back to the blue-water area and is excited to play/perform with The Meldrum Bros Band!